So you found mould in your house… 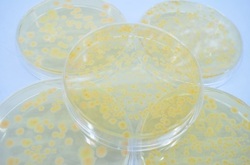 Have you ever walked into your basement, wrinkled up your nose and wondered “What’s that smell?” If you’re lucky, you just left a load of laundry for too long and running the washing machine again will take care of your problem. If you’re not so lucky, you might have a mould problem on your hands. Keep reading to find out what to do about it.

Mould thrives in moist environments. That’s why it’s most commonly seen in kitchens, bathrooms and in basements where dampness is a problem. If your mould is on the wall or on tiles, scrubbing it with a solution of one part bleach with four parts water should do the trick to remove it. As a safety precaution you should wear gloves while doing this, and it wouldn’t hurt to wear a mask too.

If you really did forget a load of laundry in the washing machine and another quick running of the washing machine again isn’t doing the trick, all is not lost. First, try taking the clothes outside and scrubbing away any mould you can see. Then, try washing again in hot water and a little bit of diluted bleach. Literally wash, rinse and repeat until no traces of mould are visible.

Mould in the basement could be a sign of a much more serious problem. By all means take steps to clean it up, but if the mould is the result of a chronic leak, you’re going have to clean it again until the underlying issue is addressed.

When it comes to mould, prevention is key. You know that fan in the bathroom? Run it every time you shower. Try opening the patio doors while cooking, unless it’s freezing out. Then you will have to settle for the fan over the range. The fans in the bathroom and the kitchen could probably use a good cleaning to make sure they’re working at top speed.

Know When to Call the Pros

Most of the time mould is just ugly, but sometimes it can pose a serious health risk. You can’t always tell which type of mould you’re dealing with just by looking at it. Trying to remove a large area of mould by yourself can cause those spores to become airborne. That’s not good! If the mould keeps coming back or the area of mould is larger than 1m by 1m, it’s time to enlist the services of an environmental remediation company.

Want more tips on maintaining your house? Make sure you follow us on Twitter or like us on Facebook! While you’re there you can see before and after photos of our parging and stucco projects from all over Edmonton, Alberta.

Fresh from the blog

Get Your Free Parging Estimate Today!